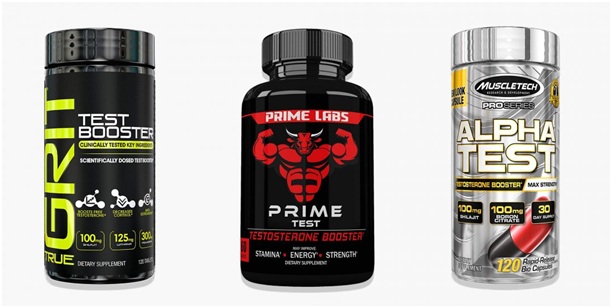 Testosterone is the main male sex hormone, but it is also important for women. It is classified as an anabolic steroid and is produced by the testicles. The maximum peak of testosterone is reached during adolescence and adulthood. Subsequently, its production tends to decrease, reaching in some cases very low levels.

WHAT ARE TESTOSTERONE BOOSTERS

They work by directly increasing testosterone or certain hormones related to it.

D-Aspartic Acid is an amino acid that is an integral part of our endocrine system where it is present in the pineal gland, pituitary gland, and testicles. It is an alternative form of L-Aspartic acid (or aspartate) which instead belongs to the category of so-called essential amino acids.

D-Aspartic acid increases fatigue resistance, for this reason, it is often used as a supplement in the world of sport. But it is mainly involved in the synthesis of male testosterone.

It acts as a regulator in the synthesis of some sex hormones that act on the release of testosterone, such as GH (growth hormone), luteinizing hormone (a hormone secreted by the adenohypophysis that has the function of regulating the gonads) and l follicle-stimulating hormone (a hormone that stimulates the production of estrogen and progesterone).

It is often used as a supplement to improve fertility in men with infertility problems and to improve the performance of power sports athletes.

However, studies have confirmed that efficacy is limited to subjects with reduced testosterone production, while for healthy subjects, that is, with normal production of this hormone, the benefits would be very limited.

Vitamin D is a fat-soluble vitamin produced by the skin when we expose ourselves to the sun. Nowadays most of the population has very limited exposure to sunlight, with consequent low or even absent Vitamin D levels.

A study showed a close correlation between vitamin D deficiency and low testosterone levels. The result of this study was a marked improvement in Vitamin D (and consequently testosterone) levels following continuous and repeated sun exposure.

To benefit from vitamin D, it is therefore sufficient to increase sun exposure. It is advisable to take about 3,000 IU of vitamin D3 per day and eat foods rich in vitamin D (such as butter, egg yolk, cod liver oil, and mushrooms).

Tribulus Terrestris is an herb that has been used for centuries in the Asian herbal tradition, particularly in Ayurvedic medicine. Most of the current research on it consists of animal studies, which show better sex drive and increased testosterone levels.

An important study in men with erectile dysfunction found that taking Tribulus improved sexual efficiency and increased testosterone by 16%. However sildenafil citrate en venta en espana, as with D-Aspartic Acid, current research has shown no benefit for healthy individuals with normal testosterone levels.

Fenugreek is a plant native to Western Asia and India imported into Europe in ancient Greece (hence its name) and was used to fatten livestock.

Interest has recently shifted to seeds rather than plants. Fenugreek contains a steroidal saponin, diosgenin, whose intake would be responsible for increasing testosterone.

The root of ginger plants have been used for millennia by traditional Chinese and Indian culture, both as a condiment and as a remedy for various ailments.

Author: Margaret
Filed Under: Fitness
Personal Training: Get Involved With Physical Activities
Improve The Muscle Power And Outlook Without Any Troubles
Searching is in progress